How are apps built?

You write a program and put it on the phone!

But what if you could represent an entire native app as JSON and load it on demand from the cloud over HTTP, just like a web page? This little idea consumed the entirety of my life in 2016.

And the result is Jasonette.

Jasonette lets you build 100% native apps on Android and iOS simply by writing a single JSON markup. Watch the video below if you haven't yet. Your life will never be the same.

When I look back at 2016, it really feels like ages because so many things happened.

But it's crazy to think that it's only been 2 months since I open sourced Jasonette!

Exactly 8 months ago from today, I released an app called Jason. This was a standalone app that was a precursor to Jasonette. You would enter a JSON URL into Jason app's address bar, and it would instantly turn into your own custom app.

A lot of minds were blown: 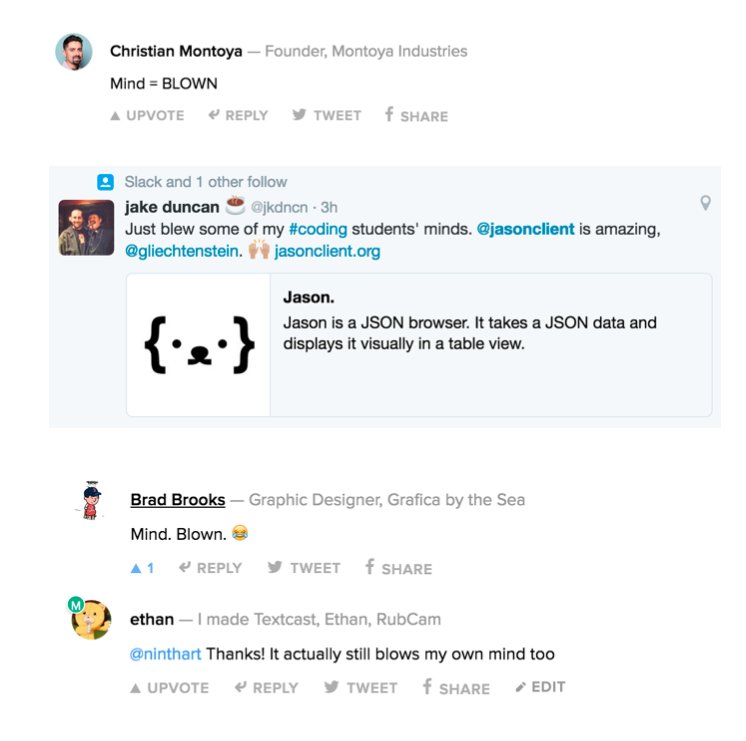 But at the same time, this was one of the most esoteric apps one could build—an app within an app, a russian doll of sorts—as pointed out below: I didn't even have a specific set of target users in mind when I built this. I just built it because I could.™

But I looked at all these reactions and thought about it:

I knew exactly what I had to do: Jason needed to be open sourced and completely set free.

Well it shouldn't be that hard to open source. After all, I already have a functional code base, right?

It took me 6 months.

Once I dived in, I soon realized open sourcing is not just about putting the code out there, but making sure people can understand it easily.

This was especially the case for Jasonette, because without a documented API, no one would be able to know what they can do with it. It would be like releasing a web browser without an HTML spec. Basically, the documentation itself was the product.

And turns out, documentation is not easy.

For the next 6 months, I did nothing but documentation and code cleanup.

These were my darkest days. I did nothing but work on the documentation, I wasn't creating something new, I was simply documenting something that already existed and I hated it. But what other options did I have? So I kept at it.

However, I soon realized that while frustrating, the process of documenting the project was extremely helpful:

In the meantime, I had set up a landing page and kept adding new materials as soon as they were ready, even though I hadn't launched it yet. And somehow people were discovering it and sharing it.

One day when I was begrudgingly working on documenting an express.js demo app for Jasonette, I saw this tweet.

What a nice timing! I was very excited, and this encouraging tweet gave me all the strength I needed to finish up the docs and prepare for the launch... which wouldn't happen for another month and a half.

Then it went on to become the #1 Github trending project. Not too bad for my first ever open source contribution! Upon releasing the iOS version, the most frequently asked question was "Android?". I wasn't surprised, since I knew that was the most obvious next step.

However what I didn't know was how long it would take me to come up with one.

Or if it would be even possible at all.

I only knew that Android had a layout system called LinearLayout which works similar to UIStackView which I used for the iOS version. So I just assumed that it would be possible, but it was really not straightforward.

This time, I decided not to torture myself with 6 months of agony. Instead of trying to make a perfect release, I decided to pick only the most crucial features and commit to releasing version 0 as soon as possible, and go from there.

I set the goal: Implement the core engine and get it out there, in 1 month.

And surprisingly, I managed to succeed.

Watch the android version and the ios version side by side. These are loading from exactly the same JSON you can find here

What excites me the most is that the project has managed to find a great community of people who share the same vision and all contributing to the project in many different ways.

I've never worked on open source before so all these contributions from people I've never met still feel surreal to me.

It's really amazing how people from all around the world can come together and collaborate to build something together this easily.

I went back and took a look at what our community has accomplished during the two months Jasonette has been out, and looks like we did a lot.

Here are some of the new major features and projects we've added since the launch (Not including bugfixes or iOS-to-Android feature port because that would make the list huuuge):

New features are exciting, but I think what's really important are things that we do to make the project itself much more maintainable and comprehensible so it's easier to work with. This includes:

It's still very early days for Jasonette so we lack a lot of these things. And the community is coming up with various solutions. I especially welcome these contributions with open arms. Here are some of the highlights we've achieved:

2016 was just the beginning. Our community is working on a lot of exciting things, and we plan to release tons of mind-blowing things in 2017. Here are some examples:

This will be amazing once we roll out officially. It will be one of the most powerful features of Jasonette. Stay tuned :)

Jasonette was designed to be extensible. However, while writing an extension for personal usage has been easy, it has always been difficult to share and distribute because of all the dependency management we had to deal with.

After having tried multiple approaches to managing extensions, we've finally found the best way to make writing extensions dead simple. We are still working on it and plan to release it soon.

Expect to see a lot of cool additional features powered by JSON in 2017.

I'll leave this up to your imagination :)

All I have to say is that this will take jasonette to the next level.

Of course, there are a lot of other cool projects which are still work in progress but I won't mention them here just to keep the mystery 😁

Also, follow and contribute to the project on Github: Jasonette-Android, Jasonette-iOS

And most importantly, Go build awesome things with it!